Never ever drink and drive

How drink driving destroys lives in so many ways.

This campaign highlights the devastating consequences of drink driving. In ‘For Ciaran’, our TV ad, we see a true life story of how drink driving destroys lives, families and communities.

Four year old Ciarán Treacy was killed in a head-on collision with a drunk driver in April 2014. His mother Gillian, (who was seriously injured in the collision), her husband Ronan, the emergency services who attended the collision and the medical team who fought to save Ciarán’s life are all featured in this ‘Crashed Lives’ ad campaign.

The advert shows exactly how drink driving can smash so many lives to pieces. It focuses on a crash and all of the people who were affected as a result of Ciarán’s death. It shows the immediate family, learning to cope with physical and emotional trauma, the emergency service workers, people who arrived at the scene, nurses, the wider family and community. It reminds us that a crash is never just one person - it sends shockwaves throughout lives, families and communities.

The message is simple: stop and think of Ciarán the next time you consider drink-driving, find another way home and never ever drink and drive.

The campaign also features short ten second vignettes featuring people who were directly affected by the collision. This includes those first to arrive on scene, the paramedics, the ICT nurse, the fire brigade and the Treacy family themselves.

Of the 219 road user fatalities with a positive toxicology for alcohol:

Of the 135 driver/motorcycle driver fatalities with a positive toxicology for alcohol:

There were 8,159 drivers arrested for driving while intoxicated in 2020

To learn more about alcohol and its effects visit  askaboutalcohol.ie. 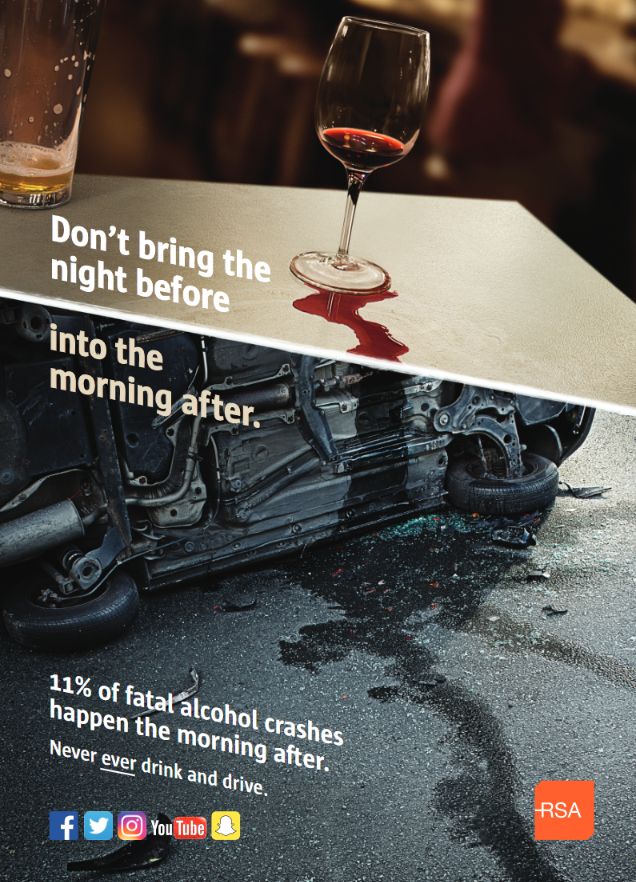 Our campaign tells the true life story of how drink driving destroys lives, families and communities

11% of fatal alcohol crashes happen the morning after. We run our drink driving and morning after campaign at the same time each year due of the number of those found with alcohol in their systems the morning after drinking. As part of this, we air a radio advert and promote a video that shows exactly what happens if you are found to be over the drink driving limit the next morning.

Our targeted campaign highlights the consequences of driving the morning after drinking alcohol.

The most recent ads from our ‘Crashed Lives’ Campaign include three true life accounts and features Siobhán O’Brien, Marjorie Flood and Dr Áine Carroll who share their story of how the consequences of road crashes have affected their lives.