Coca-Cola HBC is proud to announce the return of its Designated Driver initiative, the annual Christmas campaign that rewards those who stay sober on nights out to ensure their friends and family members get home safely. 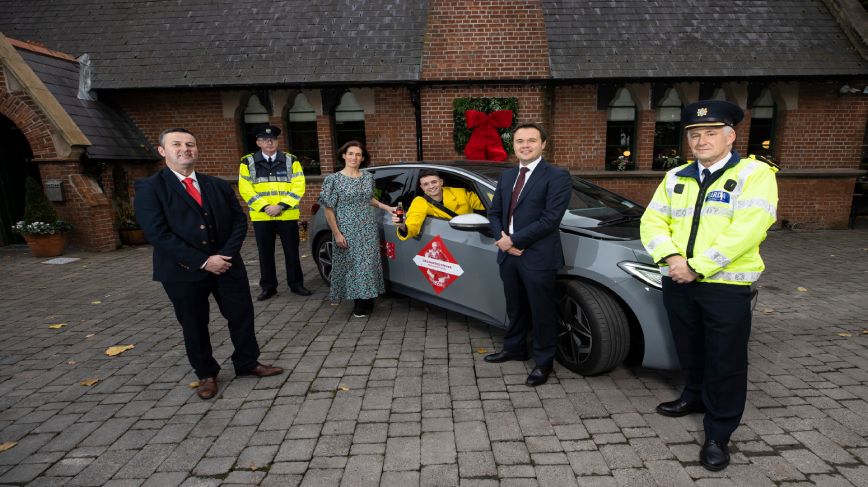 Minister of State at the Department of Transport Hildegarde Naughton, TD, today launched the road-safety campaign, together with ambassador James Kavanagh, the Road Safety Authority and industry stakeholders.

In anticipation of this special festive season, Coca-Cola’s Christmas mission is to celebrate the simple joy of human connection and the 2021 road safety campaign aims to bring this Real Magic to designated drivers.

Drivers can avail two free soft drinks or water from the Coca-Cola HBC range throughout December, at participating venues in Ireland and Northern Ireland.

The brand will also reward designated drivers by providing free parking spots at Q-Parks in Dublin, Cork, Galway and Belfast. Designated drivers simply need to present themselves to security hubs at the Q-Park stations to benefit from parking free-of-charge when on a night out.

Minister Naughton, T.D., said, “I’m pleased to announce the return of Coca-Cola’s Designated Driver initiative, an important campaign that helps to keep our roads safe and alcohol-free. It serves to remind the nation that it is important to take precautions getting to and from festivities, whether by appointing a designated driver or making other arrangements.

I would like to thank Coca-Cola, the Road Safety Authority, Drinkaware and all industry bodies for their contribution; celebrating and rewarding those designated drivers who play a selfless role in keeping roads safe at Christmas time and around the year.”

Coca-Cola will celebrate Real Magic this December, and what better way to remind ourselves of the true spirit of the festive season than by giving the simple gift of a lift!

We want to ensure that designated drivers are rewarded throughout the month and will offer two free soft drinks at participating venues once again. We’re also proud to partner with Q-Park to further reward designated drivers with free parking in Dublin, Cork, Galway and Belfast.”

Sam Waide, Chief Executive, Road Safety Authority said, “The Road Safety Authority is once again very happy to give its backing to the Coca-Cola designated driver campaign. I’m delighted to see that this year’s campaign has been extended to not only offer free soft drink and water to drivers but also free parking for designated drivers in QParks in Dublin, Cork, Galway and Belfast.

This is such an important road safety initiative. Drink driving is still a problem on our roads and our most recent attitudinal survey conducted last December shows that 1 in 10 people admitted to drink driving in the previous 12 months.  The RSA’s message has always been Never, Ever, Drink and Drive, because scientifically we know that any amount of alcohol impairs driving.”

To spread this Real Magic across the country, social media personality James Kavanagh and influential broadcaster Melissa Riddell will also take on the role of designated driver and their followers will, in turn, be in with a chance to win the ultimate night out in Dublin and Belfast. More information will be shared on their respective Instagram channels in due course - @MelissaRiddell and @JamesAlanKavanagh.

TV Presenter and Writer James Kavanagh said, “I’m thrilled to be on board to help spread the word about the Coca-Cola Designated Driver campaign. Anyone who knows me knows I live for Christmas nights out but don’t always feel like drinking. December is such a busy time of year and it’s stunning that Coca-Cola are rewarding those who choose to be the Designated Driver with free soft drinks and parking, making a night out that much better!”

Participating venues will be featured on www.coke.ie/designateddriver. Follow #HolidaysAreComing on social to be a part of the conversation.

About the Designated Driver Campaign