Important information Please note that our customer service agents cannot book or cancel driving tests over the phone so we kindly ask that you connect to MyRoadSafety.ie

How road haulage laws are enforced.

The RSA is responsible for enforcing compliance with EU and national transport legislation.  We conduct inspections at the roadside in conjunction with An Garda Síochána to check compliance with vehicle roadworthiness standards and also drivers’ hours, tachograph, drivers CPC and the requirement to hold a Road Transport Operator Licence.

To find information about the inspections we conduct and how we select them - Click here!

If you are an operator and you carry goods for hire and reward on a public road, then you are required by law to hold a valid operator’s licence.

Otherwise, you may be prosecuted and fined under the road transport acts. The maximum fine is €500,000. Any trader or business owner hiring an unlicensed haulier is also at risk of a fine. 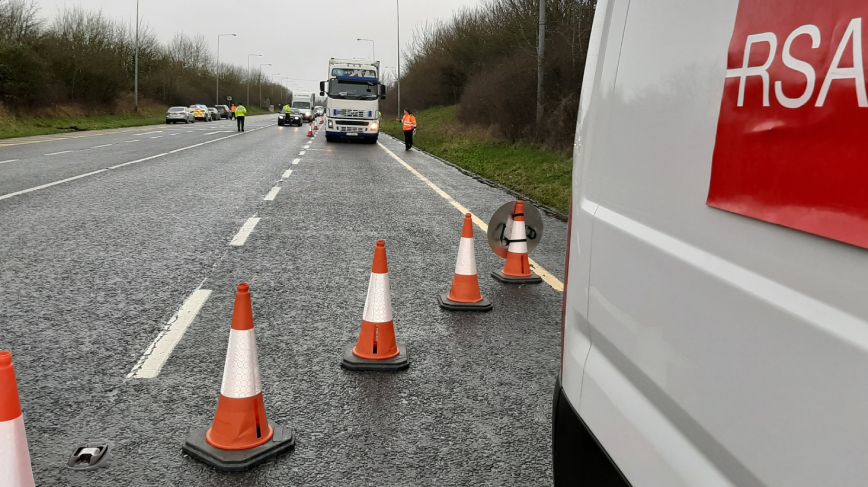 We have initiated prosecutions against drivers and operators in respect of breaches of relevant legislation since 2009. See details of convictions.

The Road Safety Authority (RSA) and An Garda Síochána enforce the operator licensing provisions of the road transport acts.

What are the sanctions for hauliers who break the law?

As well as a fine of up to €500,000, if you are an unlicensed haulier, you can expect the Road Safety Authority (RSA) to look closely at your compliance with other laws, such as those covering:

Exemptions from the requirement to hold an operator’s licence

An operator’s licence is unnecessary if your vehicle (or combination of the vehicles to be used) has a maximum authorised weight of less than 3.5 metric tonnes, including the vehicle, fully laden, and any trailer or semi-trailer.

The following types of carriage do not require you to hold an operator’s licence for national operations in the State.

4. Transit, in an unladen state, of a vehicle used for goods transport and intended to replace a vehicle which has become unserviceable in a Member State other than that in which it is registered, and the continuation, by the breakdown vehicle, of the transport under cover of an authorisation issued for the vehicles which has become unserviceable.

Where to get an operator's licence

If you’re concerned that an operator or driver may not be complying with vehicle roadworthiness, tachograph, drivers' hours, driver CPC and/or operator licensing requirements, you can report your concerns in confidence to the Road Safety Authority.

Did you find this information useful? Yes No
Thank you for your feedback
Help us improve rsa.ie

To help us improve rsa.ie please share any feedback you may have about in our Help section.