The Road Safety Authority (RSA) and An Garda Síochána have called on drivers to act responsibly and to not be tempted to drink and drive this Christmas and New Year period. This year’s Christmas and New Year road safety appeal was launched at An Garda Síochána Headquarters in Dublin and focuses on the dangers of driving under the influence of alcohol and the devastating loss of life and serious injuries it can cause. 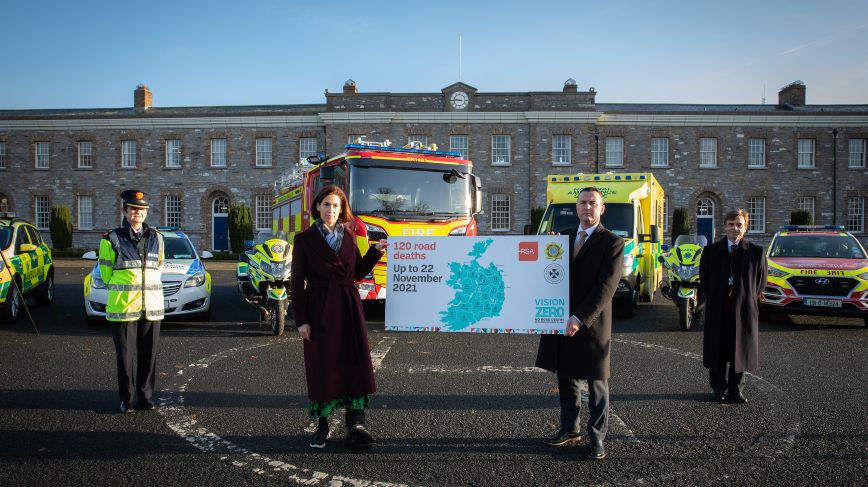 Research published by the RSA and An Garda Síochána at the launch showed that over the last five years there were 83* fatalities and 709* serious injuries over the Christmas and New Year period. This means that an average of 17* people die and 142* are seriously injured each year at this time. Almost seven out of ten fatalities were male, while almost two thirds of serious injuries were male. The time period 4pm to 8pm was highlighted as the highest risk for fatalities. Serious injuries tended to occur predominantly late afternoon/evening, with over half (51%*) occurring from 12pm through to 8pm.

Minister of State at the Department of Transport, Hildegarde Naughton said: “While the majority of drivers don’t drink and drive there are still some who persist in this dangerous behaviour. Research from 2013-2017 shows that 36% of drivers killed had a positive toxicology for alcohol. To anyone who thinks it’s ok to drive after drinking alcohol I say you need to understand that if you commit a drink driving offence you will face disqualification from driving for a minimum of three months.

Think about how a driving ban would impact your daily life. You will no longer be able to drive to work, drive to the gym or drop the kids off to school. If you are planning on having a drink this festive season or anytime, remember that alcohol and driving do not mix. Designate a driver organise a taxi, hackney, minibus or use public transport.”

Liz O’Donnell, Chairperson of the Road Safety Authority said: “Christmas is meant to be one of the happiest times of the year where loved ones gather and memories are made. Unfortunately, every Christmas we see the devastating impact drink-driving has on families. They are reminded of the heart-breaking reality of drink driving every day of the year, but particularly at Christmas by the empty chair at the dinner table where a loved one should be sitting.

Drink-driving is a choice it doesn’t happen by accident. Your choice to drink and drive could have lasting consequence. At best you could lose your licence at worst you could be responsible for someone’s death or serious injury, leaving families devastated. Look, its simply not worth the risk. So, make the right choice for you, your family and friends this Christmas and every day and never, ever drink and drive.”

Deputy Commissioner, Ann Marie McMahon, An Garda Síochána said: “This weekend marks the start of the six week Christmas and New Year road safety enforcement campaign by An Garda Síochána. An Garda Síochána will be conducting Mandatory Intoxicant Testing checkpoints around the country, to detect irresponsible drivers who drive under the influence of either alcohol or drugs or a combination of both. We will also be targeting other lifesaver offences including speeding, not wearing seat belts and mobile phone use by drivers. Members of An Garda Síochána will also focus on unaccompanied driving by learner drivers.”

Deputy Commissioner McMahon continued, “Unfortunately drink driving is still a problem on Irish roads. 4,453 drivers have been arrested on suspicion of drunk driving and 3,333 have been arrested for drug driving this year to date. This is almost 166 drivers arrested each week for these offences. This Christmas and New Year, we are appealing to motorists to drive safely and under no circumstances drive under the influence of alcohol or drugs. 120 people have lost their lives on the roads this year and members of An Garda Síochána have had to deliver this devastating news to their families. We don’t want to have to deliver this news to your family this Christmas.”

Professor Cusack, Head of the Medical Bureau of Road Safety, said: “Alcohol is a Depressant drug. Drink it and, after it passes through the liver where it is detoxified, some of the alcohol will hit the brain within minutes. The skills most critical to driving - the brain’s ability to observe, interpret and process information from the eyes and other senses – are impaired by alcohol even at the low levels.”

While all age groups (drivers 16-83 years old) are well represented in drink driving detections. Most arrests for drink driving in males is evenly spread across the late teen to mid-forty age categories, while female arrests peak in the 35 to 44 age group. Drink driving is not going away and detection of it has increased.”

There is no hard and fast rule about when it is safe to drive the morning after if you have been drinking the previous night. But motorists should allow at least one hour per standard drink for the alcohol to clear their system. A standard drink is a half-pint, a small glass of wine or a standard measure of spirits. Also, if drinking at home, you may be unknowingly drinking larger measures and therefore increasing the risk of being unsafe to drive the following morning. The key is never to take chances, don’t risk it, you could end up losing your licence or worse.”

Drivers are also being reminded that the Coca Cola Designated driver campaign is running again this year. The scheme offers free soft drinks and water to anyone acting as a designated driver on a night out with friends or family. In addition, Coca Cola has also teamed up with Q-Park cark parks to offer free parking for designated drivers in Dublin, Cork, Galway and Belfast.

The HSE has a useful website called askaboutalcohol.ie which is full of very valuable resources on the impact of alcohol on driving and drivers are encouraged to visit the site for more information on the subject.

*Fatalities and Serious Injury Figures, 2016-2021 (Figures are provisional and subject to change)