One in four motorists (26%) admitted there were times when they may have been over the limit when driving the morning after a night out according to new attitudinal research* released by the Road Safety Authority (RSA). The stark findings come as the RSA and An Garda Síochána launch an appeal for all road users to act responsibly and not to drink and drive over the extended St Patrick’s Day Bank Holiday weekend 2022. 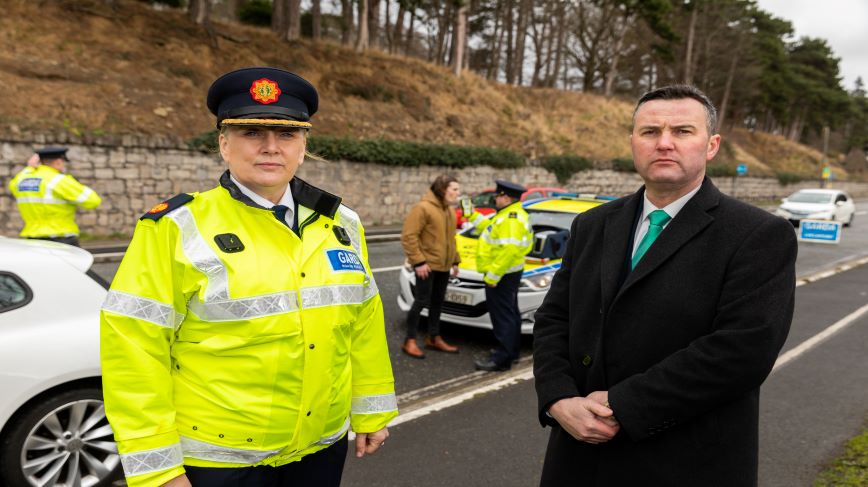 The appeal also comes following a worrying start to the year with 37 people killed on the roads to date this year. This is an increase of 20 deaths or 118% compared to the same time last year.

As part of the St. Patrick’s road safety appeal An Garda Síochána has released data which shows that from January 1st, 2021, to February 28th, 2022, there have been a total of 10,206 drink and drug-driving arrests, 1,398 of which were made this year. 10% of these arrests took place between the hours of 7am and 12pm.

Speaking ahead of the Bank Holiday, Minister of State at the Department of Transport, Ms. Hildegarde Naughton said: “We are all looking forward to celebrating our first meaningful St Patrick’s Day weekend in three years with an extended bank holiday weekend. We want everyone to enjoy themselves however, we would urge people to do so safely and responsibly. These findings are concerning, the Road Safety Authority and An Garda Síochána have been warning of the dangers of driving under the influence of alcohol for many years but some motorists continue to take risks. I am particularly struck by the number of people admitting to driving the morning after a night out with alcohol in their system. Remember you must take extra care the morning after a night of socialising, wait until it is safe before returning to the road or use public transport, take a taxi or a lift from a friend or colleague.”

Mr Sam Waide, Chief Executive, Road Safety Authority, said: “Both collision and enforcement data tells us that alcohol related collisions do happen the morning after a night out. I am urging people to take extra care this extended bank holiday weekend and to think before they get behind the wheel after a night of drinking. It is important to remember that the only way you can get rid of alcohol from your body is time. What you can do is plan safe travel to enjoy your celebrations but also plan the following day if you’ve had a big night and are on the move the morning after. I wish people well in celebrating St Patrick’s Day and to have fun but please don’t drink and drive. Think, plan and act responsibly before you use your vehicle the following morning.”

Assistant Commissioner, Paula Hilman, Roads Policing, An Garda Síochána, said: “While the majority of people act responsibly and don’t drink and drive, there are some who continue to take risks, for example, getting behind the wheel the morning after when they are still under the influence of alcohol. Garda detections indicate that one in every ten arrests for ‘Driving Under the Influence of an Intoxicant’ happens the morning after. We will be doing checkpoints day and night throughout this festival period.

Assistant Commissioner Hilman continued: “Gardaí will be keeping people safe on our roads and will be visible across the country over this St Patrick’s Day and weekend. Our priority is to keep people safe and prevent death and injury on our roads. I would appeal to those of you who are socialising and consuming alcohol to leave your car at home or designate a driver and remember you may still be over the limit the morning after. We must change the current trends we are seeing in road fatalities in 2022. Too many families have already lost loved ones this year. An Garda Síochána are pleading with people to stop taking risks, make the right decisions and never ever drive while under the influence of alcohol.”

The RSA’s survey of driver attitudes which was conducted by Behaviour & Attitudes and carried out in November 2021, also revealed that a quarter of motorists surveyed (26%) think it is acceptable to drive short distances in their local area after one alcoholic drink.

As Ireland moves out of the COVID-19 pandemic and prepares to celebrate the first extended St Patrick’s Day Bank Holiday, the RSA is encouraging drivers to mark the occasion responsibly and has highlighted some key guidelines to remember the morning after alcohol consumption. These include:

Drivers are being reminded, if planning to head out socialising, to plan how they are going to get home safely. Book a taxi, or hackney, use public transport or designate a driver. The same also applies if we are planning to walk, particularly in rural areas where there may be no footpaths or street lighting.

Ireland’s fifth government Road Safety Strategy 2021-2030 aims to reduce the number of deaths and serious injuries on Irish roads by 50% over the next 10 years. This means reducing deaths on Ireland’s roads annually from 144 to 72 or lower and reducing serious injuries from 1,259 to 630 or lower by 2030. Some of the actions contained in the Road Safety Strategy to tackle impaired driving include ‘to legislate for increased sanctions for polydrug and drug and alcohol use while driving’.