At the launch of their June Bank Holiday Road Safety Appeal and National ‘Slow Down Day’ at NUI Galway today, the Road Safety Authority (RSA) and An Garda Síochána urged drivers to slow down and always choose a speed that is appropriate to the driving conditions.

To support the appeal An Garda Síochána are mounting a national speed enforcement operation ‘Slow Down Day’, for a 24 hour period from 07.00hrs on Thursday 2 June to 07.00hrs on Friday 3 June, 2022. They will also be focusing on enforcement of speed limits and other life saver offences over the June Bank Holiday Weekend. 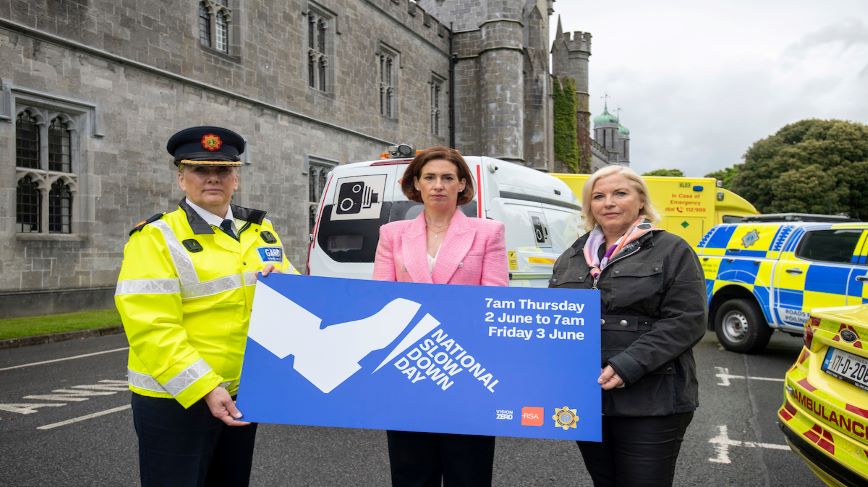 At the launch, the preliminary results of a new RSA pilot study on speeding on urban roads in 2021 were presented, which showed that over three quarters (78%) of drivers observed were found to have driven in excess of the posted speed limit of 50km/h*.

The study, which included over 5,000 observations of vehicles in October 2021 found that when viewed from a weekday perspective, 75% of observed drivers were driving in excess of 50km/h. At the weekend, 93% of observed drivers broke the speed limit. Over half of drivers (51%) were observed driving at speeds of 10km/h or higher in 50km/h speed zones*.

Separately, analysis of coronial data for 2013-2017 found that a quarter (25%) of driver fatalities, with a record of their actions available, were exceeding a safe speed in the lead-up to the fatal collisionϮ.

Speaking at the launch of the June Bank Holiday Road Safety Appeal and National Slow Down Day at NUI Galway, Minister of State at the Department of Transport, Ms. Hildegarde Naughton said: “The number of drivers observed speeding in the RSA’s recent study in 50km/h zones is very concerning. These are speed zones that are rich in pedestrians and cyclists, vulnerable road users. Reducing the risk posed to vulnerable road users in these speed zones and encouraging safer, greener active travel is one of the key priorities of the new Government Road Safety Strategy. For example, we are reviewing speed limits and examining the possibility of a greater roll-out of 30km/h speed zones, as well as conducting a review of penalties related to speeding. New in vehicle safety assist technology such as Intelligent Speed Assistance and the roll out of average speed cameras will also contribute to preventing speed related harm. While all these actions are important to reducing speeding on our roads, it is important to remember that we all have a shared responsibility as individuals and a society to slow down to and protect ourselves and other road users.”

Highlighting the dangers of speed related collisions on rural roads Ms Liz O’Donnell, Chairperson Road Safety Authority said: “The faster you drive, the more likely you are to be involved in a collision which could result in death or serious injury. I am appealing to drivers to slow down and drive at a speed that is appropriate for the conditions. It is important to acknowledge that most drivers do the right thing and drive at an appropriate speed. However, there are some drivers who continually ignore our speed limits and put themselves and others at risk. This is particularly dangerous on higher speed rural roads which are often narrow, and where bends and corners can restrict a driver’s vision. Just over three quarters (77%) of driver fatalities who were speeding occurred on rural roadsϮ. There are no margins for error on these roads which is why drivers need to slow down when using them. By slowing down you give yourself time and space to react to something unexpected around the next corner, like a tractor emerging from a field or a group of cyclists.”

Assistant Commissioner Paula Hilman, Roads Policing and Community Engagement, An Garda Síochána said: “We are asking all drivers to support our National ‘Slow Down’ Day not just on ‘Slow Down Day’ but every day. If we all slow down a little, we can make a big difference. The World Health Organisation (2017) has estimated that a 5% reduction in average speed could result in a 30% reduction in fatal collisions, and therefore reducing motorists’ speed is essential to improving safety on our roads. Remember that speeding is not worth the potential devastating loss of life or serious injury but also isn’t worth the very real risk of losing your licence – if you are detected speeding you will receive 3 penalty points on your licence, if you get 12 penalty points in three years you will lose your licence for 6 months. A lower threshold of 7 points applies for learner drivers. Think of the impact a disqualification would have not only on your daily life but those who rely on you – family, friends, partners.”

Mr Sam Waide, CEO of the Road Safety Authority said: “Studies have repeatedly shown that drivers overestimate the amount of time they can gain by speeding. This is known as the speed fallacy. The perceived gain of time is much larger than the actual gain of time, which is in fact only marginal. For example, completing an average journey of 14 kilometres at 90km/h instead of 80km/h only saves 1 minute and 8 seconds. So, while you might gain one or two minutes journey time you risk losing your license and potentially your livelihood.”

Government Departments, Local Authorities, public and private sector fleet operators are invited to participate in the initiative by circulating the key message to "Slow Down” to employees and, whether driving for business or private purposes, to always drive within the speed limit and at a speed appropriate to the prevailing conditions.

This June Bank Holiday Weekend drivers are being reminded that the RSA and participating Applegreen service stations are providing free cups of coffee to drivers to help combat driver fatigue. The offer is available from 2pm to 8pm on Friday 3rd and on Monday 6 June.

To date in 2022 there have been 70 fatalities on the road. This is an increase of 26 deaths compared to the same date last year.

*Preliminary results of a pilot study on urban roads in 2021. Data was collected at 11 urban road locations by Nationwide Data Collection using automatic traffic counters. The fieldwork exercise took place over a 9-day period in October 2021. This resulted in over 5,000 observations of vehicles (passenger cars, motorcycles, LGVs, and HGVs) driving in free-flowing traffic conditions.

ϮRSA analysis of coronial data for road user fatalities that occurred in 2013-2017.

Data is current as of 1 June 2022. Data is provisional and subject to change.